An Astronaut’s Guide to Life on Earth: Book Review 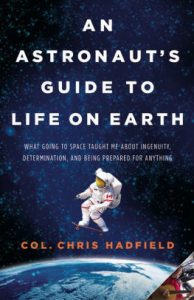 An Astronaut’s Guide to Life on Earth Rating: 3.5 Stars
By Col. Chris Hadfield

Chris Hadfield, a Canadian astronaut, has been to space multiple times aboard the American Space Shuttle and the Soviet Soyuz, and has spent a considerable amount of time on the International Space Station. What began as a childhood dream has become his reality. This book details Hadfield’s journey to achieve a lifelong goal and describes his experiences as an astronaut.

The paperback is easy to read—written so the average non-astronaut like me can understand it. It has broad audience appeal from space junkies to leadership gurus. Hadfield has a humorous nature about him and is a very likable fellow. With deep respect for his fellow astronauts and colleagues, he describes the challenges, thrills, beauty, and dangers of being an astronaut. The path to a career in space certainly isn’t an easy one, and for the less gifted and less motivated, watching liftoffs on television is more realistic than launching a career as an astronaut. Not only did Hadfield put in the hard work while keeping his eye on the prize, he also happens to be incredibly gifted from an intellectual and skills perspective. Combine a dream with intelligence, skills, and motivation, and you have the necessary ingredients for turning possibilities into actualities. It was certainly true in Hadfield’s life.

The book allows those of us who are not engineers, test pilots, or astronaut wannabes to experience a part of the space-age reality we live in. In fact, it was the information about space, the training process, and the out-of-this-world experiences that I found most interesting. I had no idea what it took to become an astronaut or why certain things happened in space. This part of the book was fascinating to me.

With such commitment and dedication to the space program, it made me think of Hadfield’s wife and children. She must have been an angel to endure all of the cross-country moves and flying solo so often as a mother and wife. It would be interesting to see how this affected her and the children. What would they write in their own books?

While I enjoyed the book immensely and learned a great deal about the space program, I was actually hoping to get more on the “guide to life on earth” part. Instead, I thought it was light in this area and could have been more pronounced. I wondered if the “guide to life on earth” part was a sly marketing approach to selling a book that talked mostly about training for life in space. It isn’t that I didn’t learn anything about living life on this planet, but that I found the book long on space and short on life lessons.

In going through my highlights, here are some of the lessons I picked up on: What we do each day determines the kind of person we become. We are responsible for our own actions. Training must be viewed as an end in itself, rather than a stepping stone to something else. “Working the problem” is a great way to approach issues. Preparation isn’t just about managing risks, but also about not unwittingly adding to them. In striving for excellence, there is no such thing as over-preparation. Criticism should be viewed as helpful advice rather than a personal attack. Good leadership entails leading the way, not cajoling others to do things your way.

For me, Hadfield’s advice about happiness was one of the most significant jewels of the book. While putting so much effort, time, and commitment into becoming an astronaut and traveling to space, he wondered how to respond if he didn’t make the astronaut program or escape Earth’s atmosphere. Would he be a failure? Could happiness still be obtained? I am glad that he wrestled with this dilemma and I really like his answer.

Hadfield notes that his identity and happiness did not depend on a goal in which he could not control the outcome. He did what he could to give himself the best chance for obtaining that goal, but he understood that with so many elements out of his hands, the goal may never be realized. Yet, he saw life as worth living in itself, whether he made it to space or not. He had a wonderful wife and family, enjoyed life as a test pilot, and saw himself as being able to live a productive, joyful, and meaningful life whether in or out of Earth’s gravity. In typical Hadfield style, he even tackled the happiness concern head on. It reveals his honesty and shows great maturity and wisdom. It makes him human and believable.

It would certainly be cool to be an astronaut and experience firsthand what Hadfield achieved. Unfortunately, I will simply have to read about it, for I get sick just riding in the backseat of a car! The book is worth reading and I recommend it. I give it 3.5 stars because it leaned more toward space training and space experiences rather than the “guide to life on earth” part.-TSW Copyright © T. S. Wise 2019