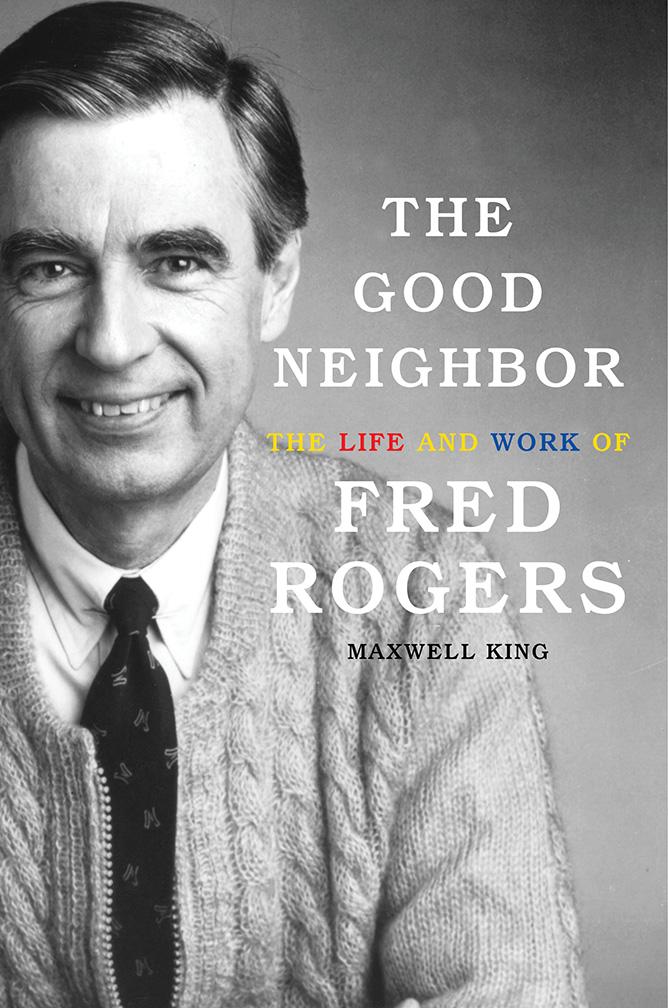 This book is about Mr. Rogers, known throughout America as the star of the children’s well-known PBS television show Mister Rogers’ Neighborhood. Famous for his cardigans, tennis shoes, calming voice, and love for children, Mister Rogers became a household name. I didn’t grow up watching the children’s program, but I certainly knew who Mr. Rogers was and could recite many of his signature lines. At the time, I thought he was rather quirky. Lately, I have been thinking about kindness with a desire to become a gentler, kinder me. In my mind, the person who embodied kindness was Mister Rogers. So, I picked up Maxwell King’s book The Good Neighbor and learned a great deal about the life and work of Fred Rogers.

Fred grew up in wealthy family in Latrobe, Pennsylvania, lived on the good side of the tracks, and lacked for nothing. His family was the first in town to have air conditioning, which was helpful to Fred’s chronic asthma. He was an only child until his adopted sister, Laney, arrived when Fred was eleven years old. Fred’s mother was very protective. She pampered and nurtured, but her protective nature, coupled with Fred’s asthma, led to a lonely childhood. Fred played with puppets and much of his television show stemmed from his own childhood experiences, his neighborhood in Latrobe, and his early acquaintance with puppets. Our childhood experiences have great influence upon our lives. Fred seemed to recognize this.

He began coming out of his shell during high school. Fred had no athletic skills in him. Instead, he excelled in the arts, music, poetry, and acting. He befriended a popular high school jock who helped others see that Fred Rogers was an okay individual. After high school, Fred attended Dartmouth College for a season before transferring to Rollins College in Florida. At that time, Dartmouth was an all-male school known for its raucous partying. At the suggestion of one of his Dartmouth professors, Fred transferred to Rollins College because it offered a music major. It was just the place for Fred. He was accepted, his music skills thrived, and he met Joanne Byrd, another music major who would eventually become his wife. That’s the way life is, we take a risk, head in a new direction, and are surprised by the many positive things that come our way.

The book described how Rogers began in television and how Mister Rogers’ Neighborhood came to be. Many experiences occurred along Fred’s road to fame and success. While it was interesting to see how this all came about, it was the man himself that I found most interesting. Although he grew up in wealth, Fred was always mindful of that privilege. He was not ostentatious and he ran his television show on a tight budget. He was gifted musically, so much so that he could hear a piece of music and immediately reproduce it on the piano. He wrote his own songs, and even operas for children. He wasn’t a perfect man, but he was a perfectionist. He minded the details. Like all of us, he would become angry at times, but for the most part, the man we knew on television was the man he was in real life.

In addition to learning about the background and details of producing Mister Roger’s Neighborhood, I learned some valuable life lessons, as well. It was wonderful to see how Fred was present in the lives of others. He valued people, especially the little people, and went out of his way to ensure that they felt seen and heard. I think this stemmed from his own needs as a child, but it is an area in which I seek to excel. Thank you Fred for your wonderful example in this area.

Fred was a focused individual. He recognized his gifts and passion and pursued them relentlessly. He paid attention to the details, for he looked at life from the perspective of others. Every detail of his television show was carefully thought through—from how a child might perceive things. In an effort to protect children from exploitation and being used in profitable ways, Fred wouldn’t allow advertising to children on his television shows. It takes time for people to discover their focus, and in a world of distractions, it becomes harder and harder. Fred rarely watched television, for he didn’t want the distraction in his life.

The book reminded me how one life can influence another in significant ways. Key people impact us in ways that alter the trajectory of our lives. I have personally experienced this, but I now have a renewed sense of responsibility in this area—to show kindness and encouragement to others since I might be the one person that makes a difference in their life

Fred Rogers put children first and was a pioneer in early childhood education. Their social, emotional, cognitive, and language development was important to him and he combined his talent, passion, personality, and understanding of television to impact thousands of children. It was how he accomplished this goal that endeared him to all, for he pursued his love of children with moral leadership and kindness, overtones of his Presbyterian upbringing and ordination. Both the television show and his personal life embodied Christian values. With joy I rate this book 4.5 stars.-TSW Copyright © T. S. Wise 2019