The Tattooist of Auschwitz: Book Review 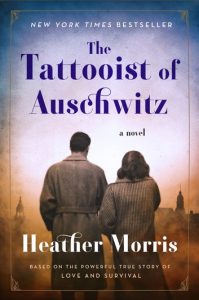 The Tattooist of Auschwitz Rating: 3.5 Stars
By Heather Morris

I like a good novel now and then, but like a hungry Hippo, my mind requires constant feeding of information and knowledge, and so I lean toward non-fiction. This year, however, I have decided to make time for fiction—just for fun. Knowing of my interest in the Holocaust, a Jewish friend recommended this book. I had never heard of it before and came to find out that it is a bestseller.

This is the story of a Slovakian Jew named Lale, and a Jewish woman named Gita who were imprisoned together in Auschwitz and Birkenau. The Nazis discover that Lale speaks multiple languages and this works to his favor. He becomes the concentration camp tattooist tasked with imprinting prisoner numbers on the wrists of newcomers, and this, of course, is how he meets Gita. He falls in love with her and determines to survive his imprisonment and marry her. The book describes Lale’s concentration camp experiences and his quest to survive. Amidst the camp horrors is the budding romance between Gita and Lale.

The book didn’t take long to read and maintains the reader’s interest. I was confused as to what was true and what was dramatic license. Apparently, the book is based on the true story of Ludwig Eisenberg and Gita Furman. After Gita’s death, Ludwig began to tell his story. Morris, the author, first wrote the story as a screenplay before turning it into a book.

The Auschwitz Memorial Research Centre, however, challenges the historical accuracy of the camp’s details as well as timelines and other details. For instance, Lale is able to secure penicillin for Gita when penicillin wasn’t widely available until after the war. Also, Gita’s prisoner number also appears to be wrong in the book.

Inside the front cover of the copy I secured for reading was this statement by the publisher: “This is a work of fiction. References to real people, events, establishments, organizations, or locales are intended only to provide a sense of authenticity, and are used fictitiously.” That pretty much sums it up. It seems that Morris found a good opportunity to write a screenplay and book based loosely on the experiences of Lale and Gita. We may never know what is true and what is not—how much is fact and how much is poetic license.

Be that as it may, the book is fascinating to read. I didn’t get wrapped up in all the details; instead, the book simply reminded me of the horror of days gone by. It prompted a little bell to ring inside my head that said, “Hey, don’t forget about the Holocaust.” That momentous event in history is a stain upon the human race that can never be allowed to happen again. I give the book a 3.5 star rating.-TSW Copyright © T. S. Wise 2019